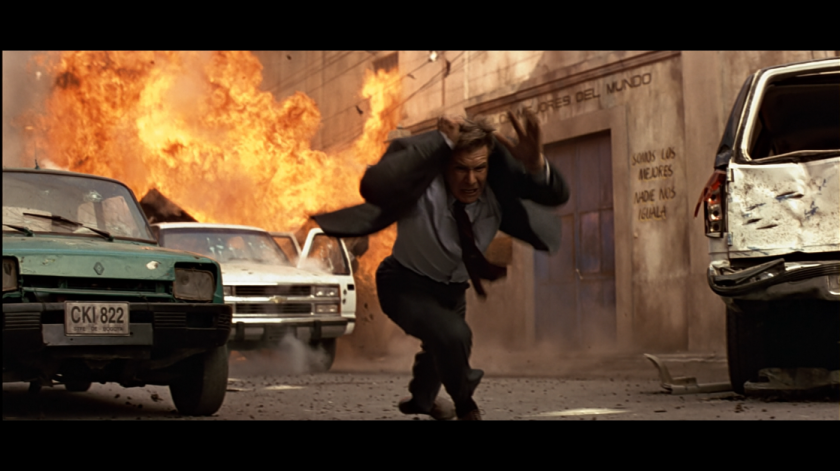 If you see a cool scene in a book or movie and you think it will make a good scene in your game, use it.  With some retooling, you can make it your own.  I’ve used the below scene quite a few times and only once been called out on its inspiration.  But the player who figured out the inspiration said it only made the scene more fun for him.

The Players are in a vehicle(speeder truck, van, carriage, whatever) when an “incident” up ahead forces them to turn onto a narrow street with buildings on either side.   A vehicle pulls in behind them and up ahead  something blocks their path. That is when the ambush starts, usually with an explosion.

The mood in this scene is surprise and chaos. There are other factors that really depend on what the PCs are doing in the vehicle in the first place. Are they escorting an important figure, transporting a valuable McGuffin, moving stolen goods, or just going for a ride? Each reason can really effect the intensity of the scene.

An ambush like this just doesn’t happen out of the blue, make sure there is a faction that hates the PC enough, or wants what the PCs have enough, to pull this off.  This ambush  will have a better effect on the players if it is orchestrated by a returning villain/faction rather than a new one.  It will also let the players know that that faction/entity is really dangerous.

It should be clear to the PCs that the enemies have greater numbers, the better terrain advantage, and possibly better fire power than the PCs.  Getting out alive should be the number one goal of the PCs. If they have a large cargo they cannot easily take with them, then they may have to forfeit it to the enemy… for now.  If you don’t think your PCs will be inclined to flee; well you could kill one, if you want to send that kind of message, or takes them prisoner.(a set piece I’ll get to later)

This should not be unwinnable, just have the odd stacked against them.  But the PCs may need to change their parameters on what it means to win.

Marksman on the rooftops.  Maybe a few mooks on the ground or lower floors.  Be prepared to add a few enemy vehicles to pursue the PCs as they try to escape.  Some of the marksmen need to have superior weaponry.  Fireball spells, Exploding/flaming arrows, Rocket launchers, something that screams; we are deadly, you better stop being a sitting duck.

Before the trap is sprung, be sure to allow any overly weary players make some perception type checks to spot the initial shooter before the fight begins.  A rocket intended for the PCs hitting the building beside them because a cautious player shot the shooter is still and exciting opening for the ambush.

When the trap is sprung some really hard driving tests may get them out of danger but that should be really darn difficult.

There should be a lot of destructible cover for the PCs to use and loose.  Use an NPC’s excess advantage or a GMI to destroy the players’ cover, always make them feel like they are scrambling.  Make spotting potential exits harder to find due to the fight.

You can give the NPCs advantage for being on the high ground, just try not to penalize the players for being on the low ground.  The scene already has a lot of things going against the players, taking on ‘negatives’ to their rolls adds insult to injury.

This type of ambush takes some planning.  Make sure you spring it at the right time.  Make sure there is some reason why the PCs are forced off their usual or expected course and funneled where the enemy wants them.  An accident up ahead blocking the road, a police checkpoint, a parade, something.  That will make this encounter feel earned for the players and not something you were going to have happen regardless.   That said do not force the encounter if the PC’s think of an alternative. If they want to try to bluff the checkpoint or try to become a part of the parade, let that encounter play out instead, it may be full of fun crazy hijinks.

Also if the PCs have a crazy plan or ability or cypher that can get them out of the ambush once it starts, that is ok.  Let them try. If they succeed fine… Describe the scene and how their plan helps them narrowly escape the brutal ambush.  Making the players feel like they heroically escaped is part of your job.

If you have a pilot/driver/hot-rod type character who is driving her sweet vehicle that she has lovingly modified and put a lot of in-game resources into.  DO NOT pull this encounter.  It’s just mean.  Make sure they are driving a rented vehicle or a cargo truck or something that isn’t too big a loss if it is destroyed.

Don’t drag out pursuit.  The ambush was the villain’s big play; if the players escape let them find safety rather easily.  If it was hard fought then they will have some time to rest and reflect on what happened.  If they thought of a great quick escape then elongating the chase robs the player of the victory of their ingenuity or great rolls.