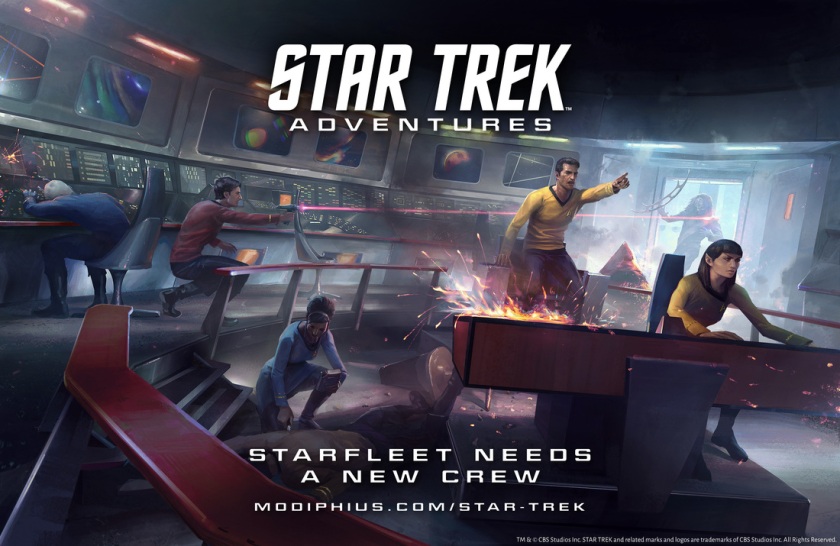 So, it’s an interesting revelation that I stopped making posts to this blog about the same time as I started running a Star Trek: Adventures game. Now STA is not solely to blame, we did have an exchange student at the time as well as my job went through some drastic changes as we were sold to another company, but a lot of my free creative time was taken up by coming up with Star Trek Adventures, Adventures…

So now after 2 Seasons and over 30 sessions, we are taking a break from The Final Frontier.With that much mileage under my belt, I figured I should relay my thoughts. These are my personal thoughts after my experiences. Your experience will vary.

A Universe to Explore

Star Trek is a vast property with endless possibilities. Star Trek Adventures does a great job opening the universe up to you. It provides all the tools you need to come up with great adventures, your own stories as well as your own unique crew to inhabit them. I was never a big Star Trek fanboy. I watched the first few seasons of Next Generation in my youth but didn’t stick with it. I didn’t dislike Star Trek, I saw all the movies, it just wasn’t that big a thing for me. So, going in and running a game I was behind the curve. It became clear almost everyone at the table knew more of the universe than I. But a did a lot of research. Memory Alpha is your friend, I got lost in their linking wiki more than a few times.

It was neat creating stories for Star Trek. It was different than any other RPG I’ve run. Instead of creating a big bad, a dungeon, and a good versus evil plot, I leaned more towards moral ambiguity. I put the players in charged situations and forced them to make hard choices, and those choices had consequences. A lot of the 2nd season was about the consequences of their actions in the first season. But designing adventures like this meant “action” took a back seat. Sure, there was combat, but it wasn’t the main focus. The players would actively try to get out of fights rather than in them. (Which is the Star Fleet way… Negotiate first) However, coming up with ideas got quite difficult after a while. You see with Star Trek Adventures there is very little player contribution to the story I found (At least for the A plot) You had to come up with the problem, the NPCs involved, all of their motivations, as well as if/then scenarios on possible player actions. Not to mention I had to come up with a series of relevant facts about anything I introduced for I needed to make sure I had something to tell the players if they spent momentum on finding more information. It was a lot, especially for someone who didn’t know the universe like the back of his hand.