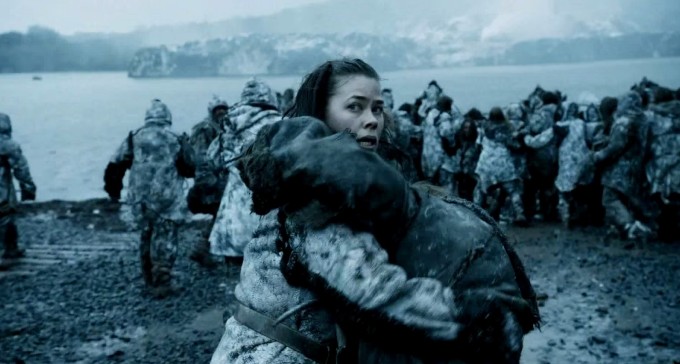 The castle is being over-run; the King has been Usurped and the town is crawling with the enemy; Imperial troops have entered the base, or the undead have broken through the walls.  It is time to use discretion, the better of Valor, and live to fight another day.  In an RPG getting players to flee overmatched fights is hard to do, but when presented with an overwhelming force they may decide it’s time to fall back.   In this Set Piece, I will discuss how to run a fun encounter where the heroes are on the back foot.

The Players are forced to flee overwhelming odds.  This kind of idea requires some setup.  As a GM you can spell out the scene.  The army arrives and your forces are falling there is no way you alone can stem the tide.  This scene could follow an epic Hold the Line type fight that failed or could just be the result of events the players had no hand in.   Try not to be rail-roady; if the players wish to fight to the end you should let them. Just don’t let up on them.  This should lead to a captured or imprisoned set-piece or maybe just player death.

The mood could be utter chaos and fear or it could be composure in the face of adversity it really depends on how the players play things.  Do they give orders? Do they calm the hysterical? Or do they find a shadow to sneak in towards a hidden way out of the city?  Take your cues from them.  Show the effect they are having on the people around them with their fearless demeanor, or show the chaos and death occurring as they run away.  If they choose the latter route you don’t have to punish them.  Maybe show others trying to lead and get swarmed by the fearful mob, or cut down by a defector or the enemy.   Sometimes making whatever decision they choose seems like the right decision after-the-fact makes for a more enjoyable role-playing experience. END_OF_DOCUMENT_TOKEN_TO_BE_REPLACED