After the high of Issue 2, I thought I had this GMing PBtA thing down, boy was I wrong.  I should have known better.   Issue 3’s problems were partly my fault and partly circumstance.  It was my fault because I had let my familiarity with the rules and the heart of the game lapse.  I was reading up on other rule systems and not making sure Masks: A New Generation was fresh in my mind like I did for Issues 1 and 2 so I was quite rusty.  The Second issue was, I had one of the players cancel the day we were set to play.  Luckily he wasn’t a focal point of my prep (actually I  already had an easy exit for this character in my bullet points), but the player was the kind of player that drives actions and makes decisions easily which keeps the game moving.  I knew his presence at the table would be missed and didn’t have much time to figure out how to compensate.

So with a little bit of further ado, I’ll show you the Bullet points I prepped for Issue 3.   There were a lot more than for Issue 2 but now that the plot had escalated I needed to do a little bit of juggling so I wanted to make sure I didn’t leave anyone out.

So here they are:

I started like I always do talking about the cover for the issue.  I wanted it to be something iconic encapsulating the fallout of the end of Issue 2.  I asked the players and they decided on a top down shot of an empty classroom desk, with Cythors names carved into one of the corners amongst other small bits of defacement.  It was a great idea and encompassed the tone of the Issue.

END_OF_DOCUMENT_TOKEN_TO_BE_REPLACED

This is a continuation of Issue 2 of my Masks: A New Generation Game Check out Issue 1 and Part 1 of Issue 2 if you have missed them.

When we last left the group they were hanging out of the rooftop having lunch, and Star Chyld was failing to convince the group he was seeing an evil version of Mobius around.   That was until Marc Hopper was thrown through a window below them followed closely by Fabien storming out the door.

Fabian is clearly pissed at him and the words he uses conveys that.  The “Heroes” stand and watch.  So Marc creates a bunch of illusions of himself and Fabian gets really angry and starts shooting lighting and attacking each one. (Note to Marvel fans.  Since I accidentally created a drug that replicates the powers of Fabian Cortez I decided I had to change his powers. Sorry)  Mobius runs to get a teacher while the rest of the party watches from above.  However once Fabian strikes the real Marc Hopper knocking him into a tree and unconscious, the party jumps into action, quickly detaining the furious Fabian.

I decided it was time for the facility to get involved so as they take Marc and Fabien to the infirmary an assembly is called.  Cythor decided to split off from the team while sitting down he received a text message from his father “outside 1 hour”.  While everyone is getting settled Slip-Stream slips in and sits next to Mobius.  This I did mainly to stir the pot and see what happens.  Slip-Stream talked about the fight and how she had already put in a request to be removed from Fabian’s team because he is a jerk.  Mobius sexual preference didn’t come up (you have to let some plot-lines percolate) but the players were sure waiting for the shoe to drop. END_OF_DOCUMENT_TOKEN_TO_BE_REPLACED

After the over-preparing I did for Issue 1 of Masks, I decided to go the opposite direction for Issue 2.  I had a vague Idea where I was taking the story line so I only had 4 Small Bullet Points for Issue 2, they were:

I started the session once again talking about the cover of the Issue.  I knew Fabian was going to be an antagonist and Dr. Eternity was going to be involved as well.  I decided to go out on a limb. A dramatic cover was going to have a member of the cast on the ground in another team members arms while Fabian stands over and Dr. Eternity over them all.  I figured the Nova was the best bet his powers rely on him taking conditions and he still had a few leftover from the last session.  So Star Chyld was on the Ground being held by Obsidian.  It was a great image the players loved it, now I had to figure out how to get there.

I started with the last bullet point first.  Obsidian is a transformed someone who doesn’t fit in and can never look like everyone else.  Beast was supposed to be Obsidian’s mentor but I hadn’t had a scene with them yet.  So we started there.  Beast was asking about the team leadership and how Obsidian was fitting in.  Obsidian being a teen was playing aloof, noncommunicative and uninterested in what Beast had to say.  Obsidian basically ended with “I’m here because I won’t be accepted anywhere else.  I either make it work or I have nothing.”   Not what Beast wanted to hear.  I didn’t have Beast push the issue instead I just let the scene end.

The next major scene took place at Star Chyld’s locker. I let the players frame the scene.  Star Chyld was trying to show off the new handheld (Guessing Nintendo Switch) he picked up with his dad’s credit card, trying to prove that he’s cool.  This is where I had an idea.  The players early on talked about wanting to embrace the cliqued teen angst and drama of the High School setting, so I decided to go After School special and see what happens.  In the locker, another player notices a strange envelope, inside was 5 tabs of RUSH, the postage stamp type drug we established in Issue 1.   In Issue 1 Star Chyld took the drug so I wasn’t sure what they would do in response.  They all got conspiratorial, Star claimed it wasn’t his no idea how it got there and they were going to hide it and get rid of it.  The Delinquent, Cythor said he’d take care of it, and as he grabbed the envelope, Fabian Showed up grabbed the new Handheld Star Chyld had and acted impressed.  I was trying to convey that Fabian was a jerk yes but still just a high schooler trying to impress and maybe in a strange way make friends.  The group wasn’t having it, however, and unpleasantly told Fabian to take a hike.  Before he left he whispered to Cythor “Hey if you want to cut class and take a couple of those let me know”  indicating he saw Cythor pocket the RUSH.

END_OF_DOCUMENT_TOKEN_TO_BE_REPLACED

X-Pelled is my Masks: A New Generation Game in an original Marvel timeline where the players are playing students at Jean Grey’s school of Higher Learning.  To learn more about the cast and the start of the game check out my previous article:

Prepping for a Season of Masks: A New Generation. As Marvel X – kids…

In my group’s Worlds in Peril game Kingpin was horrifically killed by a slightly insane Hyperion.  With Fisk gone I figured this would leave a power vacuum in organized crime in NY.   So I figured I would come up with two groups to fight over that Vacuum and have the PCs running afoul of them.  Quick easy Meta Plot.    The problem is what two groups would work. Well, this is the Mutant side of Marvel, so the Hellfire Club makes a lot of sense.  The problem is these X-Men are teens so the Hellfire Club may just be too big and adult.  The party wanted to lean into the Teen drama so I wanted to try the teen outcasts angle as one group.   You know; someone trying to pull the group away from the righteous protectors of man, mutant propaganda the X school will be filling their heads with.  So looking through the interwebs I stumbled across a group called the Fallen Angels.  A great idea for a drug dealing, nightclub owning burgeoning crime syndicate.  Former X-students and general riff-raff who just want to have fun and live it up in NYC.  What about that wouldn’t appeal to Teen-Age mutants. END_OF_DOCUMENT_TOKEN_TO_BE_REPLACED 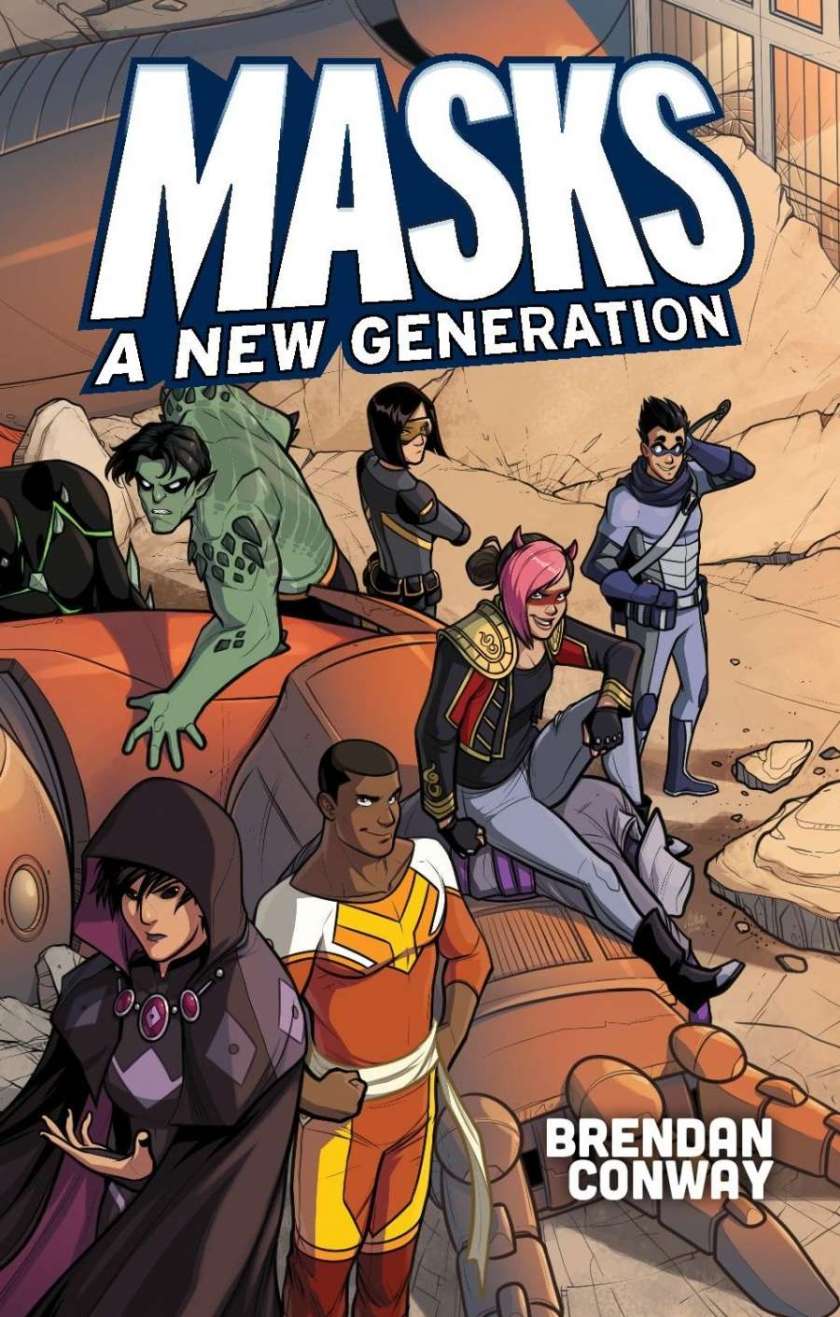 A few months ago I was talking to one of my gaming regulars about never having played a Powered by the Apocalypse game.  He happened to be playing in an online game of “Worlds in Peril” in a few days that had an open slot and so he invited me to join.  I, of course, said “Hell Yeah.”  This particular game was being run in the Marvel Universe but in the GM’s own continuity.  I jumped in as Spider-Man. I figured it would be easier to play a known character rather than create my own for a One-Off thing.  The game was a blast.  It ended up being the end of a season (arc) for the other players.   However, when they started the second season they invited me along.  I created a brand new hero named Daedalus and had a blast playing Worlds in Peril.  So as season 2 was winding down (a 5 issue(session) arc)  the GM said he was going to take a break and run or play something else.  I then talked the group into letting me run them through a season of Masks: A New Generation in the interim.  The idea being they would play as young X-Men in the same continuity as the Worlds in Peril game.

I had only played 6 sessions of a Powered by Apocalypse Game and had never run a session so the idea of running the game is a bit daunting.  But I watched and rewatched Adam Koebel (@Skinnyghost) run a One Shot that was such a blast it became a two-shot over at Roll Play as I tried my best to learn the rules and prepare. I find watching/listening to actual plays is a great way to get a better grasp of the rules I’ve read before I run a game.

I’ve always been a plot and characters over rules kind of GM so the narrative style I didn’t think was going to be too hard.  However, one thing I’ve seen in PBtA games is that a lot can happen in a few hours.  While some systems you expect the players to get through one maybe two encounters and maybe talk to a few NPC per session. Masks, I quickly learned required a whole different kind of prep.  Basically, I thought up who the villains are, what their plans were. I will have them just doing their thing until the heroes get involved.  Because in Masks, the Heroes have their own drama to deal with, and the story is really about them.

So now I had to figure out who the characters were and what kind of character arcs I would take them on. So I started with Session 0:  Character Creation.   We ended up with a Delinquent, a Nova, a Transformed, and a Doomed.  With a pretty interesting mix of ages and personalities. END_OF_DOCUMENT_TOKEN_TO_BE_REPLACED